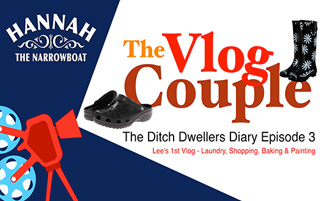 Welcome to another few days in the life of us, Paul, Lee & Hector the dog, on our floating home. Paul decided that I should be more involved with the Blogs and Vlogs, and I was keen to do so. He then shocked me by saying that Vlog number three would be filmed and edited by me too. I started when I went off on my weekly escape from the marina to the launderette and supermarket. Isn’t it funny how we kind of look forward to these simple pleasures. I normally do my washing in the comfort of my salon in Dunstable, but obviously as we are closed, I had to find an alternative.

I have been to the 24 hour washing machines that are outside Tesco in Weston Favell, but it’s not very secure as although the machine locks while its working, like a domestic machine, once the cycle has finished it then unlocks so if you’re not there to take it out, someone could just wander off with your washing! I went back again a couple of weeks ago and someone’s washing was in the machine, it had finished and the owner was nowhere to be seen, after waiting 20 minutes getting cross at the selfishness I decided to phone round a few launderettes and found a lovely lady on the other end of the phone, so off I went to St. James Launderette. It took me back to when my sister and I were kids and we went to London to stay with our Nanny and Grandad. Nanny took us along to the launderette and while she did the washing, my sister and I pushed our dollies or my Lamb Chop round in the small trolley there. Happy Days.

After I’d got my laundry done it was off to Sainsbury’s. Although there is always a large queue going round the carpark, it usually only takes about ten minutes to get into the shop. It’s very civilised as the trolleys are disinfected, they only let a few people in at a time, although some people still dawdle. I just want to get in and out as quick as I can. I have to say that I, along with others have noticed the prices going up and there does not seem to be any offers, you don’t get any vouchers for money off either. It seems everyone who can is making money out of a bad situation. I bought a couple of cards and stamps so I sat in the car to write them, then I could post them on the way home. I feel I have to get everything done on the one day, so I usually make a list or two so I don’t forget anything.

Once I was back at the marina, I dropped off the shopping to Paul waiting at the door of the boat, told him which bag the ice-creams were in so he could put them in the freezer, then went off to hang my washing on the communal washing line. I came back to put the rest of the shopping away and moaned that this bit is worse than the actual shopping for it! Once that was done, we sat in our chairs outside the boat in the lovely sunshine. I fetched the washing after dinner, folded it and put it away. That’s that done for another week.

On Thursday I decided to bake some bread rolls with a mix that a fellow boater had given me. She could only get a 3.5kg bag and was worried it would be out of date by the time she used it, so gave me some. It was easy to mix and I put it in the warm cratch to prove (rise). They were a little anaemic looking so perhaps I should have put on a little wash of some description, but they tasted lovely. Paul moaned that I put seeds in them, so I will make plain ones next time.

On Friday morning we started the day as usual with PE on the green. It’s just me and Jane, another boater who I’ve only met since lockdown. We have been doing PE on the green since 26th March and we do all sorts; Pilates, Aerobics, Kettlebells, Toning and Dance based workouts. We decided to do Yoga this morning as Jane wanted to do some stretching and something tame as her head was a little sore from one too many vinos the night before! We really enjoy it and have a laugh. Jane is still working so she can’t come every day but I’m out there almost every day.

Today we opened up our beer garden so we could toast and remember those who fought in WW2 today on the 75th anniversay of VE Day. We are still doing our photo challenges every day and one of the subjects today was beer garden, so Paul thought, as we couldn’t go to one then one would have to come to us. He printed a sign and attached it to a wooden post then set up the table, chairs and umbrella for the photo to be posted on our Facebook group. We had two minutes silence at 11.00am as a mark of respect. As it was Friday, it is Chinese night and one from Sainsbury’s is very acceptable as our favourite take-away is still closed, although the duck has gone up 50p this week!

On Saturday I fixed my gekko that had jumped off the wall and broke it’s leg, did a few bits and bobs and then got my bits together for our crafty afternoon. There are usually four or five of us that get together on the tables near the marina office as we can be together but still be apart whilst we have to socially distance due to the Coronavirus pandemic. We have painted stones, water colours and even a wheel nut cover! There was sewing happening this week too. I think we do chat more than we actually paint or whatever, but it’s so nice as one of the girls said, to actually have a date in the diary to do something other than shopping or chores. We have met for three weeks so far, and long may it go on. This week we had to move over to the staff picnic area as it is in the shade of the trees as it was really hot, but we shouldn’t complain, as the weather on the whole has been fantastic.

On Sunday Paul then went through all of my footage and showed me how to pull it in to edit it. He was very patient (mostly) and I then appreciated even more how long he spends making our videos look great from all the hours of daft things we get up to, as this took up all of the afternoon. Once we were done, it was time to eat our dinner before the second of our family quiz nights, which was fun again, but with a few more technical hitches this week! Thank you for reading, I hope you enjoy my first Vlog and we shall see you soon when we are up to more shennanigans, no doubt.